Friday, May 27, 2022 | WASHINGTON, D.C. — A broad and diverse coalition of more than 529 organizations called on President Biden today to keep his promise to working families by immediately cancelling student loan debt via executive action. In a letter to the President, these organizations, including the United Auto Workers, the International Brotherhood of Teamsters, the United Food and Commercial Workers, the Service Employees International Union, NAACP, and UnidosUS, explain that by cancelling student debt, the Administration will “strengthen the economy, tackle racial disparities, and provide much-needed relief to help all Americans weather the pandemic and record inflation.”

At the same time, the latest tracking poll from Data for Progress and the Student Borrower Protection Center released today shows likely voters continue to support this action by a 2-to-1 margin, including support by 62 percent of likely voters who did not graduate from college, 58 percent who already paid off their student loans, and 56 percent who never had student debt.

In the letter to Biden, the organizations detail the sweeping effects of student debt relief on working families. “When borrowers’ student debt is cancelled, their ability to pay down other debts increases; their geographic mobility and ability to stay in rural communities improves; as do their opportunities to pursue better jobs,” wrote these 529 organizations.

“We call on the Biden Administration to do its part to assist borrowers hampered by crippling debt,” said AFL-CIO President Liz Shuler in a statement last week. “Organized labor was built on the foundation of creating a pathway to the middle class for everyone, but skyrocketing student loan debt has become an insurmountable obstacle to achieving this goal.”

A copy of the letter to President Biden is available here (see an older version here).

The organizations also highlight the disproportionate effects of student debt on borrowers of color, particularly Black borrowers. “To minimize the harm to the next generation and help narrow the racial and gender wealth gaps, bold and immediate action is needed,” these 529 organizations wrote. “President Biden should protect all student loan borrowers, by cancelling existing debts.”

“The average Black borrower has $53,000 in student loan debt four years after graduation, nearly twice the amount as their white counterparts. President Biden, $10,000 will not help those in the lower class who have been devastated by our oppressive system,” said NAACP President Derrick Johnson. “The Black community will be watching closely when you make your announcement, but $10,000 is not enough. $10,000 in cancellation would be a slap in the face. President Biden, it’s not about whether you can do it, it’s about whether or not you have the will to do it.”

For the first time, Data for Progress and the Student Borrower Protection Center looked at support among borrowers who paid off their student loans—a segment of the public long suggested as a potential source of backlash to debt relief—finding that nearly 6-in-10 borrowers who no longer have student debt support action to cancel some or all debt for all borrowers. 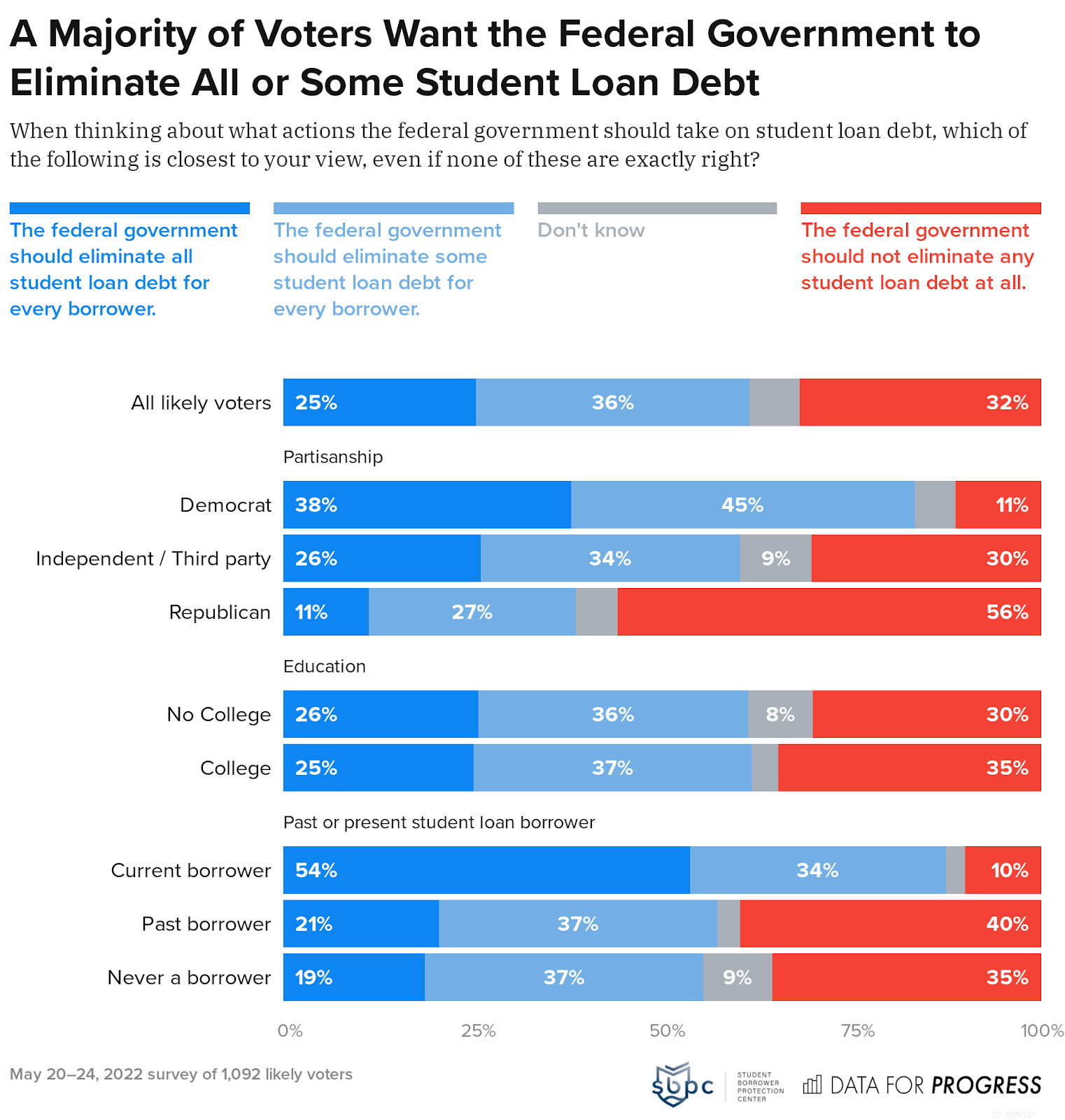 From May 20 to 24, 2022, Data for Progress conducted a survey of 1,092 likely voters nationally using web panel respondents. The sample was weighted to be representative of likely voters by age, gender, education, race, and voting history. The survey was conducted in English. The margin of error is ±3 percentage points.

The Student Borrower Protection Center (SBPC) is a nonprofit organization focused on alleviating the burden of student debt for millions of Americans. The SBPC engages in advocacy, policymaking, and litigation strategy to rein in industry abuses, protect borrowers’ rights, and advance economic opportunity for the next generation of students.