March 24, 2022 | WASHINGTON, DC — Today UnidosUS, the Student Borrower Protection Center, and Data for Progress released a new tracking poll exploring the effects of student debt on Latino likely voters. Among respondents with student debt, a large majority expect to make “major changes to saving or spending” if student loan payments resume, including 6-in-10 Latino and Latina likely voters with student debt. In contrast, fewer than 1-in-5 likely voters with student debt, including a similar share of Latina and Latino likely voters, is “very confident” in their ability to make payments when they come due. The current pause on student loan payments, last extended by President Biden in December 2021, is slated to expire on May 1, 2022. Economic anxiety among Latino and Latina likely voters adds to the growing case for President Biden to act quickly amid historic inflation and an uneven economic recovery for Latino workers.

“Ensuring an inclusive economic recovery that doesn’t push Latinos further behind requires timely action on student debt. Now is not the time to send Latino borrowers back into a pre-pandemic student loan system that will only burden families’ pocketbooks. A return to the status quo will hinder Latinos from building wealth and growing their participation in the middle class; a focus on saving for important life goals will be harder to reach as student loan payments restart without more permanent debt relief,” said Amalia Chamorro, Director of Education Policy at UnidosUS. 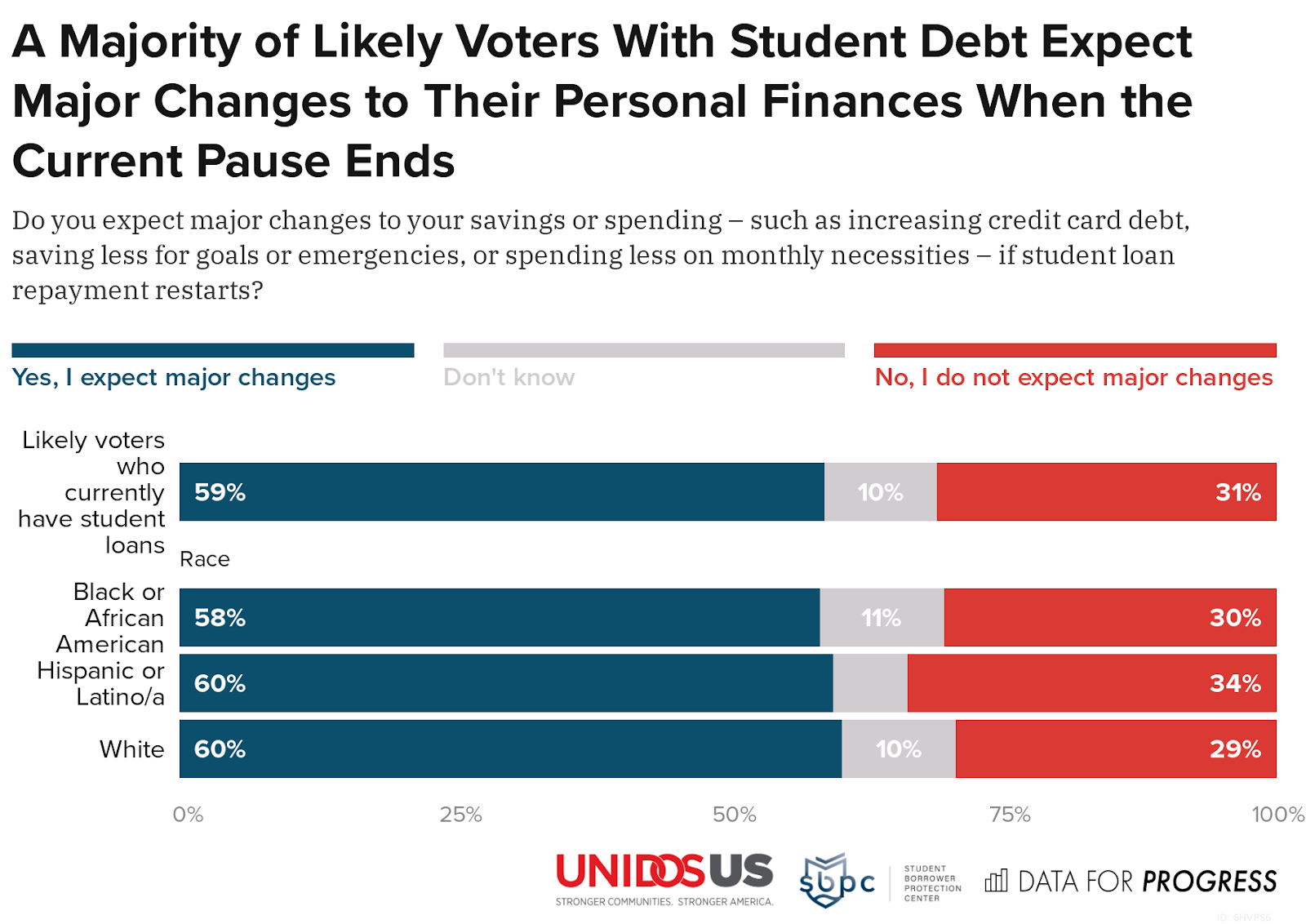 “Extending the popular pause on student loan payments would be a political slam dunk — and would provide millions of Latino borrowers much-needed respite from rising prices and the all-too-high cost of living,” said Ethan Winter, lead polling analyst at Data for Progress. “President Biden should listen to Latino voters and allow this critical pause to continue through the end of the year,” said Ethan Winter, Senior Analyst at Data for Progress.

Even prior to the COVID-19 pandemic, Latino families in the U.S. have been systematically prevented from building wealth and financial security. Two years into the public health emergency, Latinos remain in particularly precarious financial positions and are more susceptible to the continuing economic fallout of COVID-19. Job interruptions, layoffs, and furloughs caused by the pandemic have disproportionately affected people of color, most especially Black and Latina women. The unemployment rate for Latino workers is still more than 50 percent greater than the unemployment rate for white workers, and ongoing supply chain disruptions make clear that this issue is not on track to resolve itself. The additional burden of a student loan payment prevents Latinos from recovering from the pandemic. Accordingly, Latino and Latina voters overwhelmingly support government action to address the rising burden of student debt, including debt cancellation and an extension of the pause on student loan payments.

“With payments due in just five weeks, tens of millions of people with student debt cannot afford to wait any longer for President Biden to act,” said SBPC executive director Mike Pierce. “Today’s poll shows that the pause on student loan payments has brought desperately needed relief to student loan borrowers across the country, including Latino borrowers. Without action, the Biden Administration is poised to reverse these gains and break a key promise to the voters who put him in the White House in the first place.” 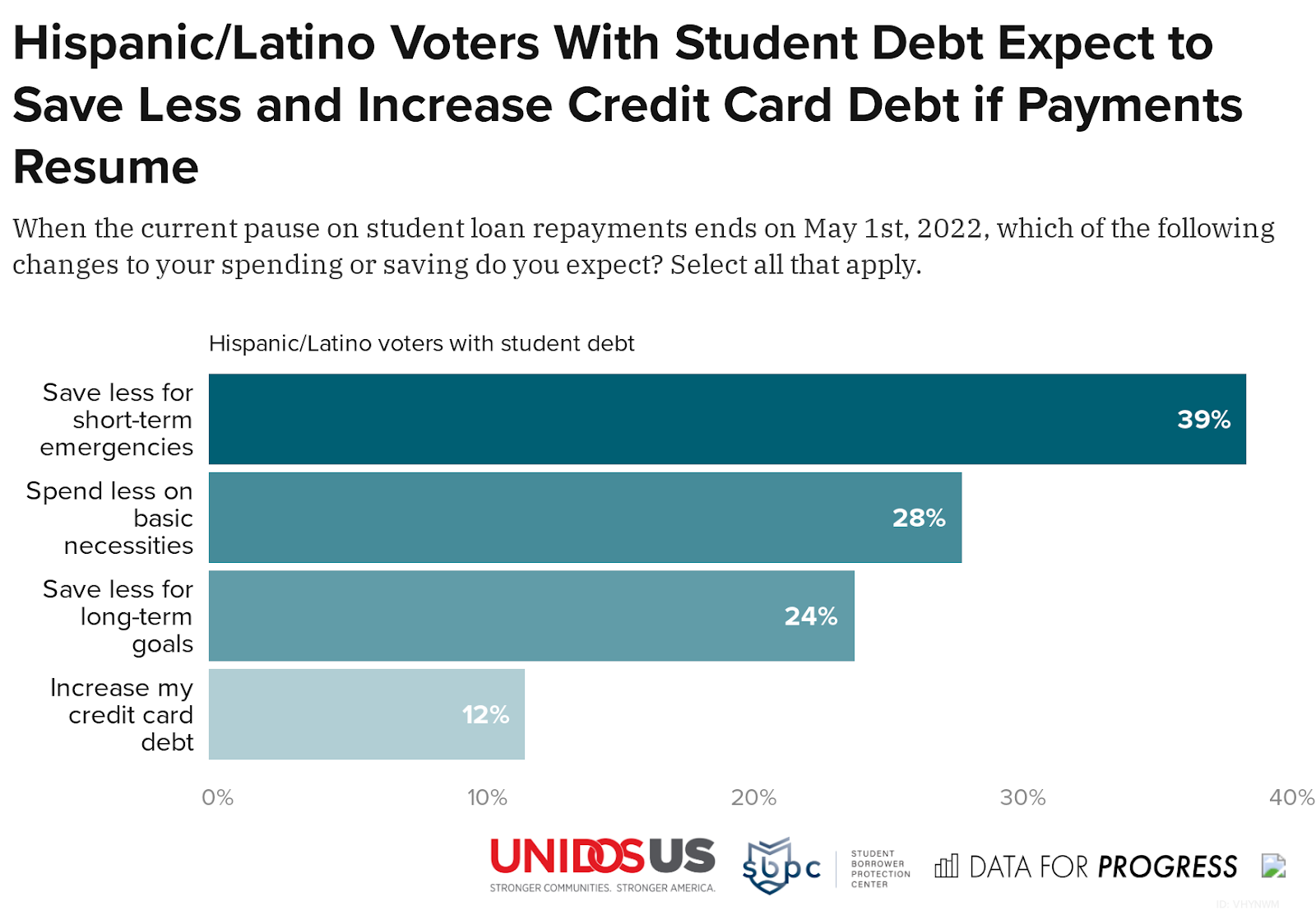 Today’s poll is the next in a series from Data for Progress and the Student Borrower Protection Center tracking public opinion on issues related to student debt and economic security. This new poll also shows that among Latino student loan borrowers, many of those who express anxiety about the economic effects of looming student loan payments expect to offset new financial pressure by taking on more debt or forgoing basic necessities.

In early March, White House Chief of Staff Ron Klain suggested that the Biden White House and the U.S. Department of Education are considering a further extension of the pause on student loan payments, interest charges, and debt collection in response to the ongoing public health emergency. Today’s poll shows that an extension through the end of 2022 is broadly popular – 6-in-10 likely voters support an extension, including a majority of voters who do not owe student debt. 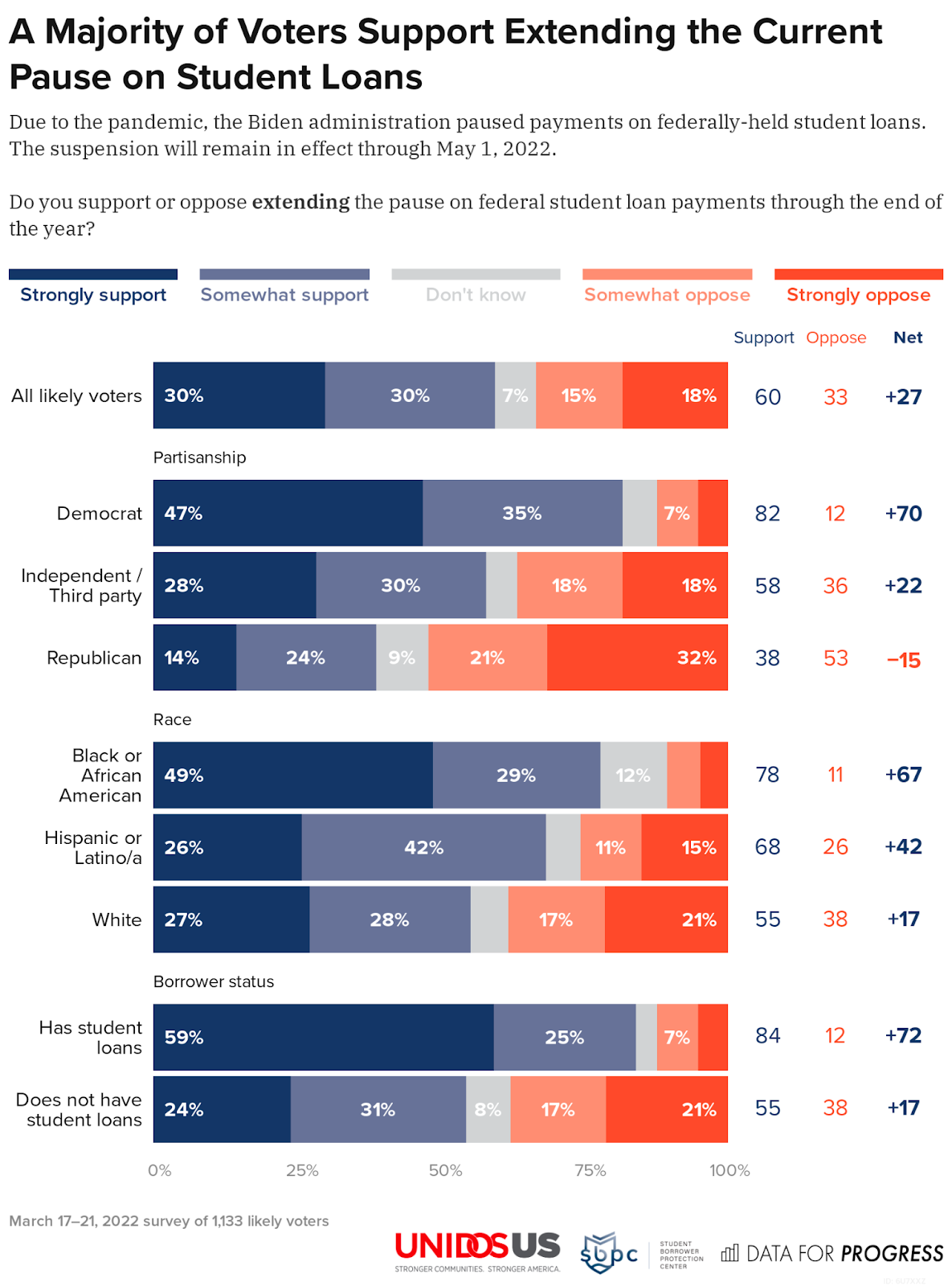 Economic anxiety is also high among another key segment of President Biden’s base: Black voters. Today’s poll shows that among Black respondents with student debt, approximately 6-in-10 expect to make “major changes to saving or spending” if student loan payments resume. In contrast, fewer than 1-in-8 Black likely voters with student debt are “very confident” in their ability to make payments when they come due. Black likely voters also express overwhelming support for federal action to address the student debt crisis: nearly 8-in-10 Black voters want Joe Biden to extend the pause on student loan payments and nearly three quarters of Black voters want Joe Biden to cancel some or all student debt for all borrowers. 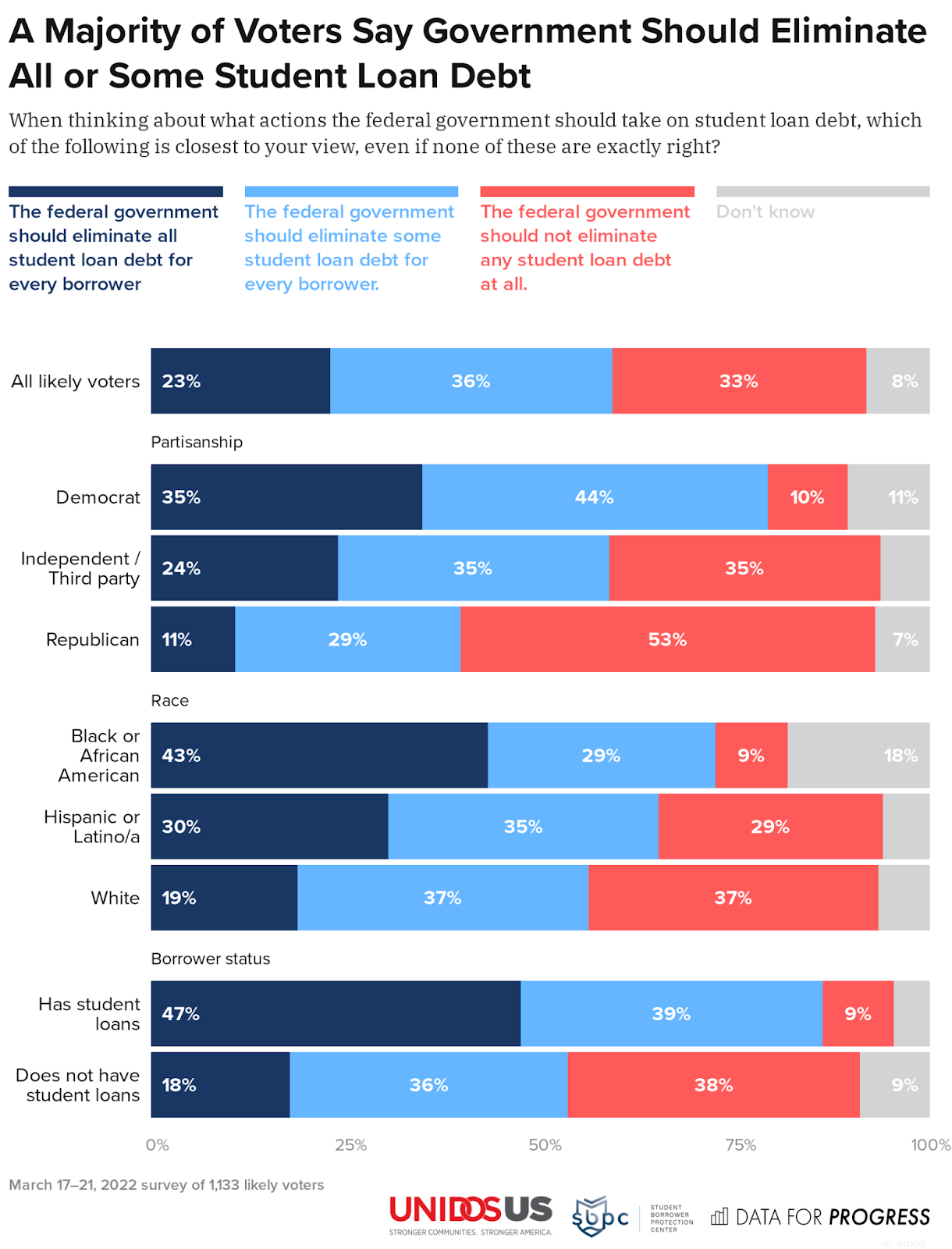 From March 17 to 21, 2022, Data for Progress conducted a survey of 1,133 likely voters nationally using web panel respondents. From February 4 to March 21, 2022, Data for Progress also conducted a survey of 837 likely voters who have student loans nationally using web panel respondents. Both samples were weighted to be representative of likely voters by age, gender, education, race, and voting history. These surveys were conducted in English. The margins of error are ±3 percentage points.

Before the pandemic struck, tens of millions of borrowers struggled to navigate a badly broken student loan system. America’s student debt crisis wreaked havoc on the financial lives of families across the country, despite payment relief and debt forgiveness programs that promised that these debts would never be a life-long burden.

The racial wealth gap significantly contributes to Black and Latino borrowers’ having to take on more student debt to access higher education. In addition to more debt, these borrowers experience higher rates of delinquency and default. Wage and employment discrimination intensify these disparities. All of this was true before the pandemic began and is worse now.

Earlier this month, a coalition of 210 organizations representing students, borrowers, workers, communities of color, people with disabilities, veterans, and millions of others sent a letter to President Biden calling for an extension of the pause on student loan payments until the President fully delivers on his promise to cancel student debt and fix the broken student loan system.

No student loan borrower with a federally-held loan has been required to make a student loan payment since March 2020 when former President Trump signed the CARES Act, pausing student loan payments and suspending interest charges for tens of millions of student loan borrowers. This set of protections was extended via executive actions taken in August 2020, December 2020, January 2021, August 2021, and December 2021. However, these protections are set to expire with payments to resume for federal student loans on May 1, 2022, and while repayment pause provides temporary relief, action on debt cancellation is needed to provide life-changing, long-term relief for tens of millions of borrowers.

UnidosUS, previously known as NCLR (National Council of La Raza), is the nation’s largest Hispanic civil rights and advocacy organization. Through its unique combination of expert research, advocacy, programs, and an Affiliate Network of nearly 300 community-based organizations across the United States and Puerto Rico, UnidosUS simultaneously challenges the social, economic, and political barriers that affect Latinos at the national and local levels. For more than 50 years, UnidosUS has united communities and different groups seeking common ground through collaboration, and that share a desire to make our country stronger.

About Data for Progress

Data for Progress is a progressive think tank and polling firm which arms movements with data-driven tools to fight for a more equitable future. DFP provides polling, data-based messaging, and policy generation for the progressive movement, and advises campaigns and candidates with the tools they need to win. DFP polling is regularly cited by The New York Times, The Washington Post, MSNBC, CBS News, and hundreds of other trusted news organizations.

Student Borrower Protection Center is a nonprofit organization focused on alleviating the burden of student debt for millions of Americans. The SBPC engages in advocacy, policymaking, and litigation strategy to rein in industry abuses, protect borrowers’ rights, and advance economic opportunity for the next generation of students.